Giving birth is to many the ultimate fulfillment of life. For the woman there are a lot of things going on when she carries a child in her womb for several months, feeling her body change as a little person is slowly forming inside her, feeling sick, throwing up in the morning, noticing the first movement, the first hiccup, maybe getting a sore back – the joy I am sure is divided. The anxiety, will this go all right? And if so, who will the little person become – who is he or she?
Becoming a parent will eventually turn your life upside down. The focus will change from «me» or «us» to «the little one». You have to be there, 24 hours a day, every day, every week. The responsibility is yours, and yours only.

You have to keep the little person safe. Learn to understand this type of crying from the other types of crying. Learn to discover the world through the babys eyes. But first – you have to give birth to it.

My best friend had given me the honor of staying with her and her boyfriend during the birth. Since her delivery date was in the middle of January, but the baby can decide to come any time between several weeks ahead of time, or several days after, I had to be prepared. So at the end of December I went into 24 hour stand-by service. My phone was turned on, and laying on my bedside table. And, of course, it rang during the middle of the night! At 02.15 in the morning (midnight if you ask me…) on January 7th I woke up, and got the coming fathers short message: «It has started, we´ll come by to pick you up soon».

During the two and a half hour drive to the hospital, party in snow storm (thank heaven for no foreign trucks without winter tires blocking the way completely – only one that blocked half of the road), there was plenty of time to measure the timing between the labour pains. Since this was a first time experience for me, I was carefully measuring, and expecting the pain to come at shorter and shorter intervals, afraid that I had to become a midwife in the middle of the road at the middle of the night in a snow storm. But no, the waves came at a steady beat, not speeding up at all, and it stayed like that for hours, and hours, and hours…

To make this a short story: It took time! And I am so impressed by my friend, that was not turning into a Godzilla, but breathed her way through every contraction that came, not uttering a single word of discomfort. Seeing her pain, and how her strength got weaker and weaker as the hours passed by, trying to get some rest in-between, it was hard not being able to help or release her pain in any way. Since I am suffering from ME myself, I was also struggling, and actually crawled into her bed to get some rest while she was soothing out her pain in the bath tub. So now I can also say that I have been laying at the maternity ward!

In the afternoon the nurses decided our little fellow needed to come out, and I was going to both film and photograph the event. When the real pressure pains started it only took minutes until the little prince was born. When I look at the movie afterwards I can hear that my friend is swearing (two times), and that she is screaming during the hardest part, but honestly, when I was there I did not hear any of it! I was so focused in the moment that my hearing was gone.
To be given the honor of being there, watching a baby being born was magic. Pure and simple magic.

A little miracle. A healthy baby boy. A tired mum, a smiling father, and a very tired photographer.
Thank you to the mum and dad for letting me be a part of this wonder of nature. I owe you big time 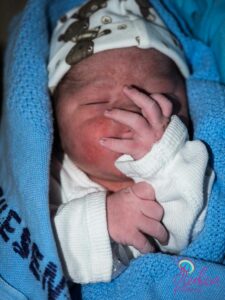 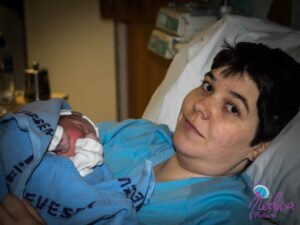 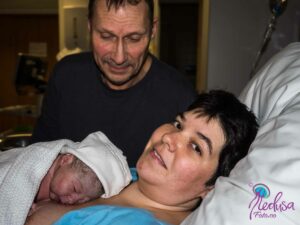